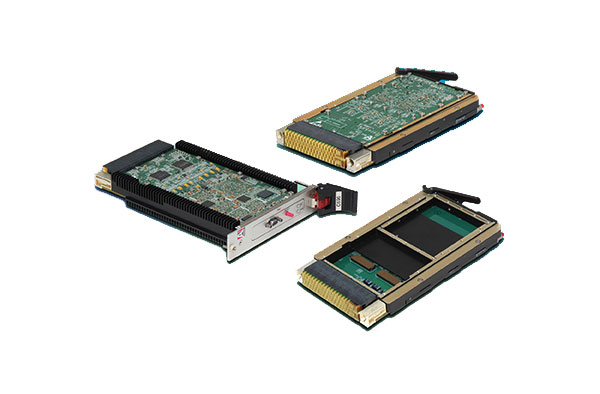 PCIe switching on all three boards is handled via an IDT 89H32NT24AG2 Gen 2 switch for up to 5 GT/s of data transfer with low latency switching and integrated DMA engines facilitate the fast data transfer. Allocations can be made for transparent and non-transparent ports (up to eight) on each switch, depending on the level of system complexity.

Since the C695 has no GbE requirements, it can accommodate up to 24 ports or 32 lanes.  Optionally, the C695 features an on-board XMC site, where I/O is routed to the backplane, for more user customization.  It features two standard port configurations: eight PCIe x4 or six PCIe 4x with an XMC site that includes a PCIe x8 interface.

The managed GbE on the C690 provides fully configurable L2 and L3 management for increased system security, control and scalability across the data link and network layers.  It is ideal for high functioning, complex system requiring adaptable system configurations.  The switch’s fast boot modes require only 5 seconds to L2 and under 90 seconds for a full L3 configuration boot with routing tables.

An additional 1000Base-T port on the front panel is available in air-cooled versions of the unmanaged C691, which is cost-effectively employed in systems that just need I/O port expansion.  The switch does not require user configuration, provides full GbE L2 switching and powers up in less than 2 seconds.

All three OpenVPX-compliant switches feature slot profiles matched to their specific I/O variants and are shock and vibration resistant.  Air-cooled, conduction-cooled and conduction-cooled 2LM versions are available for a number of commercial, rugged and military installations. These include C4ISR applications where high data throughput must be coupled with low switch latency to maximize data transfers.