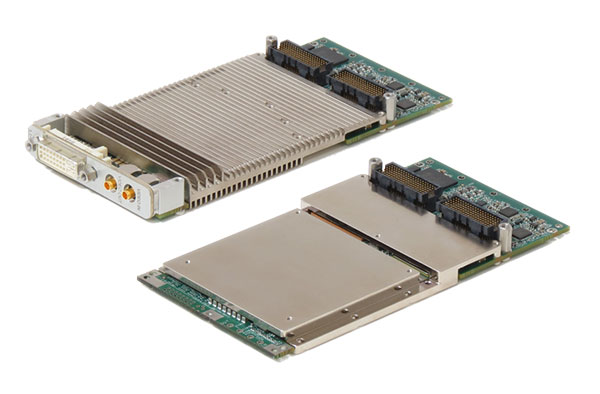 By pairing the E8860 GPU with additional on-board resources, such as an optional FPGA, the M596 delivers a much wider variety of video I/O interfaces than many other E8860-based products.  These interfaces include DVI output channels as well as S-Video and STANAG 3350 inputs and outputs.  For legacy systems with older display technology, the M596 drives Composite (RS-170A [NTSC]/PAL) displays.

Emil Kheyfets, Director of M&A Product Management, Aitech Defense Systems, “With the increase in the number and types of video and graphics streams available, embedded systems need methods that not only manage data better, but can actually make it more useful to convey more information to the end-user. Being able to render multiple streams in various formats means a system can provide deeper insights for more intuitive graphics processing and support mission data recording via output cloning.”

The E8860 provides many native features including 2 GB of integrated GDDR5 SDRAM, video and audio decompression units, graphics language acceleration with support for DirectX and OpenGL and parallel processing engines with OpenCL support.

On its own, the E8860 GPU supports a limited number of output interfaces. Aitech’s implementation, with additional on-board video conversion resources included in the optional FPGA, provides a much wider variety of video I/O interfaces not natively supported by the GPU.

For video overlay/underlay, the GPU graphics can be superimposed on video input streams and drive the combined result to any of the six independent monitors.

The M596 XMC connects to the host system with an eight-lane PCIe link for high-speed transfer of graphics and video and is available with support for Windows and VxWorks.

Systems employing the M596 have access to the greatest levels of real-time graphics processing available in high-performance embedded computing (HPEC) today. It is particularly useful in harsh environments that have versatile video overlay and capture requirements, such as advanced civil or military aviation or ground vehicle systems.

Several hardware engines, such as graphics language acceleration, parallel processing engines and video and audio decompression units, are integrated into the rugged M596.  It supports the most advanced graphics and video standards including DirectX, OpenGL and Shader.