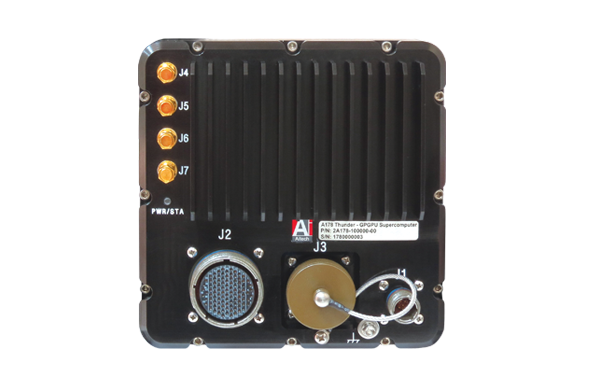 Chatsworth, Calif. October 2019 – Aitech North America, a part of the Aitech Group, is expanding its line of rugged GPGPU systems to include an NVIDIA® Jetson AGX Xavier-based AI supercomputer.

With twice as many CUDA cores as Jetson TX2-based systems as well as the addition of new Tensor cores, the A178 Thunder offers some of the most powerful processing capabilities in an ultra-small form factor (SFF) system. The system features 512 CUDA cores and 64 of NVIDIA’s new Tensor cores.

Tensor cores in the Xavier SoM amplify the matrix processing of large data sets, a critical function in AI environments, by enabling higher levels of computation with lower power consumption. When this SoM is coupled with Aitech’s rugged computing expertise, the A178 Thunder handles up to 22 TOPS (Tera operations per second) to provide local processing of high volumes of data where it is needed, closest to system sensors.

Weighing less than 5.5 lbs and measuring only 8.5” x 3.2” x 6.8”, the rugged A178 Thunder is SWaP-optimized and ideal for a number of military and defense applications, such as distributed computing and signal processing in next generation autonomous vehicles as well as surveillance, targeting and EW systems.

For users looking to deploy applications fast, Aitech offers an evaluation board – the EV178 – that gives embedded engineers a reliable platform to quickly develop AI applications and port those solutions to the new high-performance, rugged A178 Thunder.

Seven preset power modes are standard on the A178 Thunder and users can create custom presets with specific clocks and online cores. It also provides a wide input voltage range of 11 Vdc to 36 Vdc with steady state operation.  Input power is protected by an EMI/RFI input filter as well as reverse polarity protection.

A number of I/O options are available including Gigabit Ethernet, 10GBase-T, USB 3.0, HDMI output, UART Serial and CANbus as well as discrete and display ports. Video is simultaneously captured on up to four channels via SDI (SD/HD) or over eight channels at full frame rates using Composite (RS-170A [NTSC]/PAL) interfaces.  Also included is a high speed, internal NVME SSD with a storage capacity of up to 1 TB.

The A178 Thunder will be on display at NVIDIA’s GPGPU Technology Conference (GTC 2019) in Washington DC this November, alongside the A176, which will feature a live demo (Booth #411).