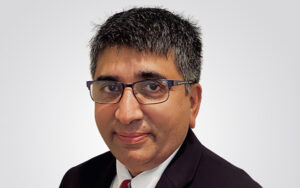 Shah has led several technology companies through business transformations that leveraged existing technologies and produced a culture of innovation.  Most recently, he served as general manager of Zen Technologies USA, where he developed global opportunities in the US and in the Middle East.

As president and CEO of Quantum 3D, he helped relaunch the company’s advanced technologies to bring virtual, augmented and mixed reality training and simulation to military and defense companies.

In his more than 20 years of working in the global landscape, Shah co-founded Locaxion, which developed an iPhone app that ranked in the top five of its industry over several years, as well as served as a business consultant helping mid-size businesses develop a global business strategy.

Shah holds an MBA from Pepperdine University, and a BS in Computer Science from Rensselaer Polytechnic Institute.