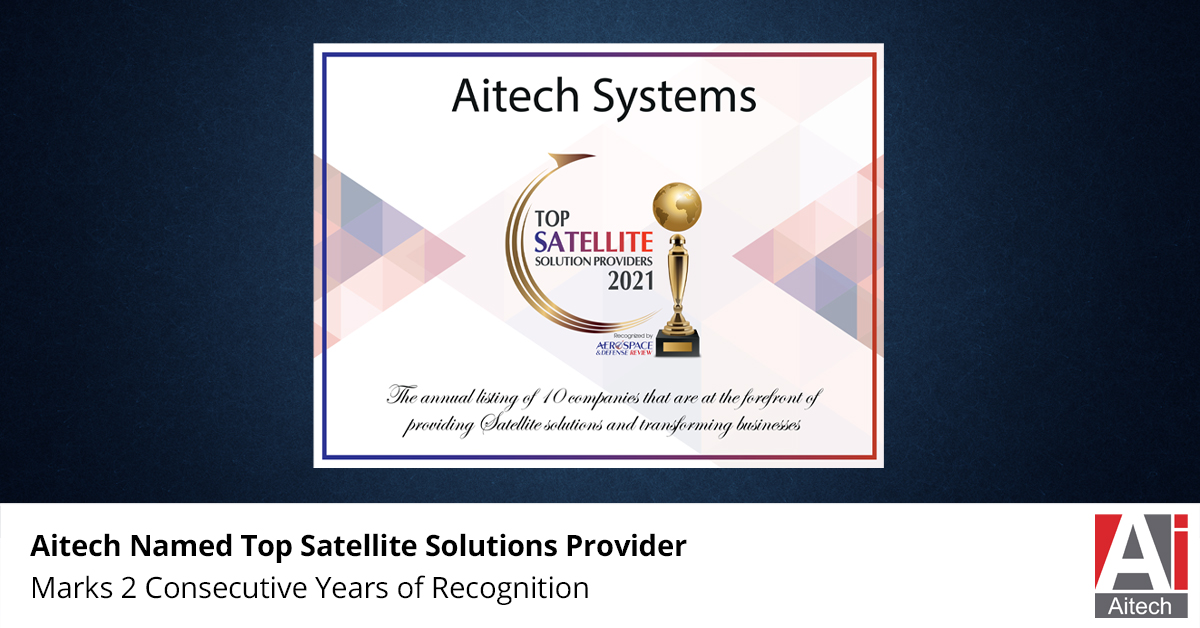 Company credited for its continued innovations in reliable, space-rated subsystems for all orbit levels

Chatsworth, Calif. December 2021 – Aitech Systems, a leading provider of rugged boards and system level solutions for military, aerospace and space applications, has been named a top satellite solutions provider by Aerospace & Defense Review for the second consecutive year. In addition to pioneering the use of cost-effective COTS components in space environments, Aitech was the first company to bring GPGPU supercomputing capabilities to near earth orbit (NEO) and low earth orbit (LEO) applications.

Anthony Lai, Business and R&D Director for Space, Aitech, noted, “For more than 30 years, Aitech has developed space-rated computing systems for missions across all orbit levels. It’s an honor to be awarded for our current innovations, which include fielding spacecraft electronics for short-duration spaceflight like launch vehicles, small and micro satellites in NEO and LEO environments.”

Recognizing the needs of this growing space market segment, Aitech developed the COTS-based S-A1760 Venus™, the most powerful, smallest GPGPU AI supercomputer rated for space flight and small satellite constellations. The system is validated for use in short duration and NEO/LEO environments through a new Series 300 level qualification standard that identifies the rad-tolerant needs of space components and systems not used in deep space or long-haul applications.

Pratish Shah, General Manager US for Aitech, commented, “We’re excited that innovators focused on technology advancement, like Aitech, continually appear in this annual listing of premier companies, which are at the forefront of providing satellite solutions and transforming business.”

Aitech develops cost-effective COTS-based and custom integrated systems for use in a variety of government, commercial and private space programs. The company has successfully delivered products for programs such as NASA spacecrafts, satellites and human spaceflight mission, HALO Lunar Gateway, Orion capsule, CST-100, Dream Chaser, SpaceShipTwo for space tourism, and many other in-orbit missions.

The company recently launched its Series 300 products to offer a level of cost-effective, reliable COTS solutions that bridge the gap between costly NASA EEE-INST-002 compliant parts and those that can be effectively used for lower orbits and short duration space flights in LEO and NEO orbits.

With 40 years of experience, Aitech is a global digital electronics manufacturer with expertise in providing reliable, rugged embedded systems for the harshest, most unforgiving environments in military, aerospace and space applications. We enable the world’s leading companies to expand their most revolutionary explorations and push the boundaries of innovation across sea, land, air, and space.

We provide COTS products based on multiple open standard architectures, including SOSA, FACE, VPX, CompactPCI, etc., such as single board computers, I/O, memory and graphics boards, PMC/XMCs and sub-system enclosures, with over 100,000 boards and custom integrated systems delivered to take on the most challenging projects in the harshest environments and succeed.  As a pioneer in space applications, Aitech offers proven space pedigree with trillions of miles flown in a variety of space missions without a single failure.

At Aitech, we stand behind our product and our customer to secure a better tomorrow.